I’m Right and You’re an Idiot! I’m right, and you’re an idiot.

This catchy book title I learned about recently sounds strangely similar to sentiments we’ve all heard plenty of, even uttered ourselves, over the months before and since the presidential election of 2016.

Uncertainties about the future looming ever larger, fed by the frenzy and frazzle of information overload, my emotions over the past nine months vacillated between fear, disgust, and fresh surprise before dropping back into a certain sort of numbness. 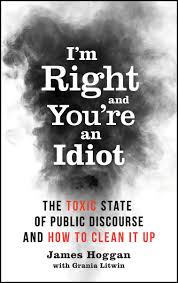 Exhausting.
I kept finding myself asking, ‘won’t someone just go first in this conversation and be real?! Can’t we cut through the BS and get to what matters most?

Increasingly troubled by the mounting tensions and polarization in our conversations on just about anything, I was ‘all ears,’ quickly drawn into the interview with the Canadian author, James Hoggan as he elaborated on the subtitle to his book: “The Toxic State of Public Discourse and How to Clean it Up.”

I became entranced and turned the radio up.

Hoggan’s an attorney with a successful PR firm in Vancouver. Appointed to the board of the David Suzuki Foundation, Canada’s best known science-based environmental organization, for his work as a public affairs consultant, he fielded what became a pivotal question by none other than David Suzuki himself.

That question sparked a decade-long investigation into the role of misinformation and pseudoscience in instilling doubt, stalling growth of public concern, and impeding vital action when the veracity of the science itself is solid.

People aren’t paying attention, he discovered, because ‘the world’s biggest threat now is a “smog of adversarial rhetoric, propaganda and polarization that stifles our ability to solve problems collectively.”

Our Time Has Come to Listen Deeply

We need to communicate well to be effective, we all know this. It happens in conversations, real ones.

Yet, we all know it’s easier said than done.  Why ? Because in typical conversations we place greater weight on our ability to articulate, convey, and debate a point of view rather than to listen deeply.

We’re encouraged to be persuasive speakers, debaters even, not necessarily great listeners.

What to Do Wisdom

Hoggan’s work challenges us to enter our conversations mindfully as a means to clean up our public discourse. Some words of wisdom for clean up:

1.    While facts are important, and we need to have facts to add weight to our points of view, facts alone don’t change minds. Feelings do.

2.    Feelings underpin our values, our beliefs. Because our heart-felt beliefs are intertwined with our identities, they bind us together in communities yet potentially blind us to the truth.

3.    Assume that those who disagree with you are well-intended, feeling humans, not idiots. Extend openness to them. Listen, especially if it’s difficult and you rather scream at them. Besides, you’d want them to do the same for you.

4.    When we disagree with one another we’re quick to correct, yet none of us like to be told what or how to think. Listen instead to learn another’s point of view, their concerns, their story. Bite your tongue and breathe here, it’ll help you stay present in the conversation. And, you won’t die for listening, I promise.

5.    Remember, even if you do have facts on your side, it doesn’t mean you may not be part of a conversational problem. You, too, could unknowingly be wrong. Yep, it’s possible. Self-righteousness shuts down listening and closes dialogue.

6.    Despite some mischief makers among us, most people across the ideological continuum agree that the current level of gridlock is not only untenable, but reaching crisis levels. It could rip us, and our democracy, apart.

“The quality of any intervention is determined by the inner quality of the intervener.”

Not to put too fine a point on it: Our time has come. It’s now. It starts here, with me and you.

Conversations from center, involving deep listening and dialogue, don’t involve correction.   Instead they align around the common ground of concerns we share as human beings.

New stories, from which to collaborate in solving problems together, can begin to emerge, clearing the pathway for improved personal and public discourse.

Practice: This week, whatever uncertainty you face, stop and center yourself. Tune into your own internal, sensing experience, and allow yourself to align with what you care about.

In fact, you can start now, here, by pausing to take a breath. Hold it briefly, and then exhale a long, slow and complete breath through your nose. Be present to your sensations as you breathe. Notice your chest settle, your belly soften.  Do this a couple of times.

Answer this question, “what inner quality do I want to tap into in my conversations today?” As you listen to your response, breathe into it fully.

And by the way, I know you’re not an idiot.